What a great week this has been – NOT. I’ve spent half of it lying in either bed or the sofa, mostly curled in fetal position trying not to choke in tears. After a good start to my week by hitting the gym hard despite terrible tiredness and brain fog, my fortitude completely thanks to copious amounts of extra cortisone, candy and fellowship of beloved Addy friend, I fell into the black abyss of pain, brain fog, desperation and depression.

There are times I think if there’s Ms Fate somewhere out there, I’m not liking her sense of humor. Now is one of those times. Or maybe this is just a balancing act after having such a wonderful time visiting my Addison friend and her spouse in Tampere, hanging out with them and lifting weights together.

Usually traveling completely wastes me and I spend a couple of days recovering a few hours’ trip. But recently I’ve built stamina by visiting my new part-hometown of Hamina almost every week by bus. Yes, I’m officially dating ❤ ❤ and am partly cohabiting with my new love ❤ ❤ and of course have found a new gym and already gotten a new lifting friend ❤ ❤ So no wonder as I’ve had way too many positive things in my life, f***ing Fate decided to throw some new obstacles in my way…

Soooo back to my week. I had two amazing lifting sessions with my friend. Squats great, bench great, deadlifts great. I have upped volume for my upper body as I lowered it for legs to let my hip problem and tendinitis recover. Last week I accidentally hit a new record in close grip bench as I did sets of 2 with 57,5 kilos (it was supposed to be 47,5 kg but hey, brain fog means inability to count sometimes…) and I feel my bench has benefited a lot from the bigger volume also as improved technique. But the increased volume was too much for my back, and my chin ups suck big time. Dammit. Well, at least I now know. Just 2 weeks ago I did 3-4 reps of chin ups with 5 kilos added weight but now I struggled to get one measly rep with 2,5 kilos

Here’s a video of my bench with 50 kilos:

Sucky chin ups aside, REAL trouble and pain started as I returned home. I’ve been trying to get rid of some of my medications or at least reduce their doses during past few months. There’s many reasons. Like hating to start my morning by swallowing over a dozen pills. Or spending about 100 euros every month for medicines. And treating side effects of the drugs with new drugs.

Well, the withdrawal symptoms of some medications aren’t very fun, either… Last three days I’ve been suffering terrible pain all over my body, from skin sensitive to touch to constant headache, throbbing pain in my bones and joints, complimented by flashes of sharper pain very closely resembling electric shocks. Guess if my need for cortisol has also gone up? Despite extra dosing, I’ve been half unconscious, half crying from exhaustion, pain, depression and desperation hitting me like a tidal wave, and just plain old boring hangover sensations of low cortisol. Funny, eh?

Past couple of nights I’ve laid awake and cried wondering if this never ends. The best bit is that my over 3 month long sick leave is nearing it’s end and a week from now I’m supposed to be in shape to work. I wonder if I’ll make til the end of first week before I once again disappoint everyone. If I’m not getting better and soon, it’s a stark reality as I haven’t been able to form coherent sentences half the time.

I’m torn. Between the feeling that I want to give up – to exhaustion, pain, black fog of depression – and the amazing, sometimes annoying, steely will inside me that shouts “shut the fuck up with the whining and get up whether you like it or not”… Some days I’m so tired that I have to be the fighter. But I just don’t know how to FUCKING GIVE UP. So here I go again.

This is dedicated to you all – my amazing Addy friends, every other rare disease butterfly, the ones suffering from depression or other mental illness, anyone crushing under the burden of hardship and setbacks in life. I know. Please stay strong. If not for anything else then just to prove the naysayers wrong. Let’s lift each other up ❤ ❤

One thought on “Not F***ing Giving Up” 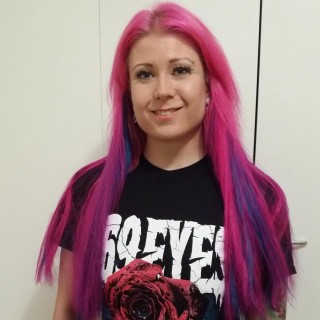